Developing of a mobile navigation system for inland waterways is the main objective of the research project “Mobile Inland Navigation”, funded by NCBiR under the Lider program. The system will based, on the model of car navigation systems. System will be provide the full necessary informations to the end user in the inland areas (e.g. tourist who sails recreationally). The main scientific purposes is to development of spatial data processing method for the needs of mobile cartographic and efficient navigation on inland waterways. The practical aim is to develop a system MOBINAV which will be the expansion of the car navigation conception for inland waterways. Ultimately, the system will consist an application installed on the mobile device (hereinafter referred to as a mobile application), and a desktop server.

An additional source of dynamic data can be the sensors in the mobile device or external ships’ sensors, e.g. GNSS (ang. Global Navigation Satellite System) and AIS transponder or receiver (called. Automatic Identification System). Contractor assumed that in MOBINAV will be also possible to use information from external service providers such as. RIS (called. River Information System) and WMS services provider (called. Web Map Service). To achieve full functionality of the system will be required access to the Internet directly from the device (usually via the mobile phone network), but the basic functions are also available in off-line mode.

From the perspective of the end user the described system can be equated with an application on a mobile device. In fact it’s scope much wider, and its construction involves a series of problems to solve related to the processing of spatial data. The main components of the system are the data management module, the module of spatial analysis and the cartographic presentation module. The Data Manager Module allows for the integration of data from databases and to develop them in a form which is cooperating with the MOBINAV system. In order to effectively manage of data suggested own MODEF format, which based on GML format. MODEF format stores selected and integrated data source.

One of the key elements of building a mobile navigation system is the presentation of spatial information model, which directly affects the perception of information products by the user. The project developed a model of the mobile cartographic presentation, based on the scientific literature. Constructor developed also a own tool for building this model. The tool based on the technology QGIS.

As part of the presentation assumes the ability to personalisation the appearance of the screen by the user. The following two presentations were developed for the user in various color schemes.

At the moment, work is underway on the technology demonstrator. 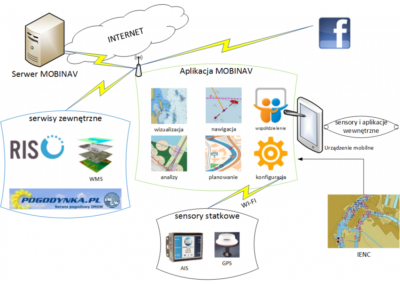 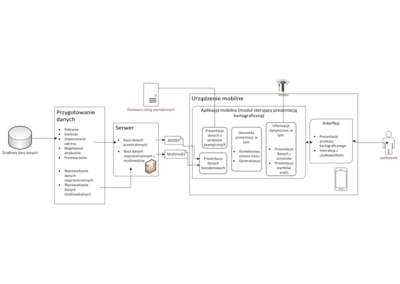 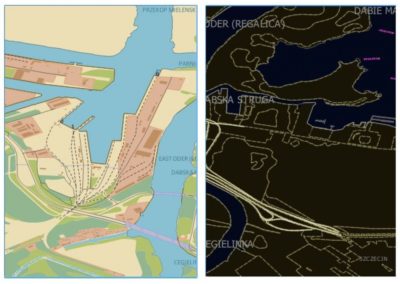